Success Is A Process

People come up with ideas and hold on to them like they are lottery tickets. They think that one day it will just happen and all of a sudden they are successful. I love when I hear someone say “They came out of no where!”. Nothing could be further from the truth.

Every successful person I know has worked their assess off and scraped and crawled their way to the top refusing to quit a long the way. They believed in their idea and held onto it and didn’t go around seeking every opportunity that came their way. They did all the tedious, boring, and mundane tasks, day in and day out and then, and only then did they have a breakthrough.

All we see though is the finished product. No one pays attention until that breakthrough happens. No watches Michael Phelps when he gets up everyday at 4:30am to practice, spending 8 plus hours a day in the pool. All they see is him winning gold in the Olympics and say “Wow that kid is fast, he’s a natural”.

No one saw Lance Armstrong putting in the lonely miles on his bike in the Colorado Rockies, all they saw was his Tour De France wins…

No one watched Michael Jordan shoot a thousand  free throws everyday in practice, just the one he made to win the championship. 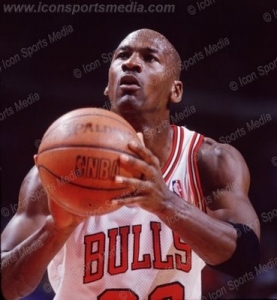 You don’t need the next best campaign to take your business to the next level or the next info product that will require you to spend countless hours figuring out and learning how to do it. It’s the small things that are boring, mundane, tedious, frustrating, and give no immediate gratification that add up to being successful.

So do me a favor and throw away your lottery ticket and realize that no one else is going to do it for you and stop waiting for it to come to you. If it is going to happen, it is going to be because of the process you put yourself through to become the person you need to become to be successful.

People tell me all the time that I “came out of no where”. Actually, I started my first fitness business in 2001 at the age of 23. I actually created a job for myself not a “real” business (that’s a topic for another time). Took on a partner in 2005 without doing my due diligence which caused me to lose it all in 2007.

Then I started a mobile sports performance company in 2007. This company made money but the logistics made running it a nightmare, so I quickly shut that down and sold all the equipment to start another fitness studio business. In May 2009 I started my Fit Body Boot Camp out of a gymnastic center. Which took off really fast. So fast in fact, I closed my fitness studio down in order to scale my boot camp up. My boot camp is what I am most known for. I took it from $0 to over $300,000 in gross revenue in just 3 years.

I also, started an info business in March of 2010 and then 6 months later I realized I wasn’t that passionate about the niche I had picked. I used the online marketing skills I had acquired to grow my offline business. The lesson I learned there was to only pursue an opportunity if it was inline with my purpose and passion.

In October of 2011 I launched Boot Camp Underground with Justin Blum and it was a success. We did $44,000 in sales in a week. Not bad for our first product launch. And just 3 weeks ago I launched the Fit Clients accountability software and already have over 400 subscribers on it.

The number one reason I am successful isn’t because I “figured” it out or have some missing piece of information that no one will share… It’s because I didn’t quit or give up and just kept putting in the miles and put my self through the right process to get where I am today.

My mission with this blog is to share the processes that I have put myself through and the perspective I have gained over the past 12 years to help you grow your fitness business and create the lifestyle that you want for you and your family.

Talk to you soon,

Jeff “putting in the miles” Sherman